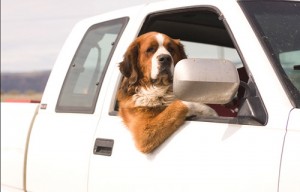 A late-morning breakfast meeting at a nearby restaurant turned sour for me recently when I walked through the parking lot afterward and saw motion out of the corner of my eye.

A dog. In a car — a very nice, very expensive car. With one window cracked about two inches, parked in the sun.

I stuck my hand in the car (risking a bite, but you do what you’ve got to do sometimes). It was hot — much hotter than outside the vehicle. The little gray and brown dog hopped up to the window and panted hard watching me.

There’s a coffee shop that shares the parking lot, so I waited a few minutes, hoping someone would come out from retrieving their latte and open the car. Didn’t happen. So I called 911 and stood there watching the pup for signs of severe heat distress.

Ten minutes later (that’s 15 total if you’re keeping track), the car’s owner sauntered out of a nearby shop. I asked her if she had any idea how hot her dog was — by now, he’d sprawled up across a shady corner of the backseat and lost interest in us.

She told me she’d only been gone a minute; I told her I’d been standing there for 15 and offered to stand for another 15 while she sat in the car, just like her pet. At that point, she called me an idiot and peeled off.

This particular parking lot sits about five minutes from my house, and I decided to do an experiment when I got home, just to ensure I wasn’t overreacting to the pup in the car. My instant read thermometer and I went outside and stood in the driveway, which is mostly shaded that time of day. It read 84 degrees. I cracked my back driver’s-side window, just as the other car had, and put the thermometer on the backseat, where the dog had been. I shut the door, walked away, and started a timer.

At two minutes, the sun went behind a cloud and stayed there (this will be important in a minute).

At five minutes, it was 92 degrees in my car’s backseat.

At that point, I figured no one in their right mind would leave a dog in the car any longer than that, and pulled the thermometer out. Just then, the sun came out — remember that when I spotted the dog on the parking lot, it was sunny.

So for kicks, I put my thermometer back in the car for another five minutes.

One hundred and six degrees. In five minutes, the temperature inside my car jumped 10 degrees, and had soared to 20 degrees hotter than outside (where it was still 84 — I checked again at the end, with the same thermometer I used inside the car).

On top of that, the pleasant breeze I enjoyed in the driveway wasn’t making it into that two-inch window crack at all. Inside, it was still and stifling.

My friends at the MD SPCA tell me signs of heat distress in dogs include excessive panting, difficulty breathing, dry nose, vomiting and seizures. Had I seen that, my friend in the luxury car would have been short a window and a nice-sized fine from the police.

I know it’s fun to take our dogs for rides, but it’s really hot out, gang. Add 20 degrees to the outside temperature and subtract the moving air — would you be happy? Please leave the pets at home.