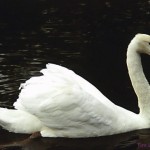 Swans have a seemingly peaceful demeanor about them and their monogamous ways has made them the symbol of lasting love. The graceful swan, usually snow white with long graceful necks have an aggressive side to them that most are unaware of. They are extremely territorial and and aggressive when they feel threatened.  While this a good trait to have in terms of them driving away geese it doesn’t always end up happily.

Hensley was a married man, father of two who worked for a company that used dogs and swans to keep away unwanted geese. When he was checking on the swans on a kayak that morning a swan turned on him.

Cook County sheriff’s investigators believe Hensley either got too close to the swan or the swan’s nesting area, the Sun-Times said.

When the swan began its attack, Hensley fell out of the kayak, into the water, where the swan continued its ruthless attack. Despite his attempt to swim to the shore, the swan persisted. By the time emergency personnel got there, Hensley has already gone under the water. A biopsy showed that he had died from drowning.

Hensley liked working with animals, according to his father-in-law, George Koutsogiannis. “Maybe he didn’t fight back enough when the swan attacked him. Maybe he didn’t want to hurt the animal. I can’t understand how this was possible,” Koutsogiannis said.