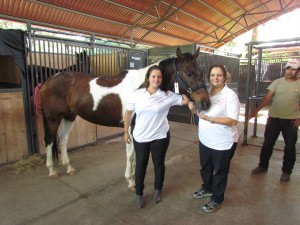 Andrea and Natacha with Angel Bass taking a quick break after her bath at La Carrana Quarantine facility in La Sabana, Costa Rica.

Angel and Wizard’s adventure began in San Diego, California in mid-November when they were transported down to Miami by trailer.  They had to do a brief quarantine in Miami as well as a series of blood  testing in order to be permitted to enter Costa Rica.

Once all of the test results were returned and the health certificate was completed to meet Costa Rica standards, the MAG issued an import permit and Angel and Wizard were permitted to enter the country.

After the flight arrived in San Jose the horses were transported to La Carrana in La Sabana by trailer to their private stalls where they are boarded until the MAG does a blood test (the same one that was done in the US) and the results come back negative (again).  This usually takes about 10-14 days then the  horses will be released to go to their new home in Guanacaste.  World Pet Travel transports the horses to Guanacaste once they have been released by the MAG and reunites them with their owner Cindy.  They will be together before Christmas 🙂