Jean Luc’s arrival into Costa Rica took almost a year and was not an easy trek by any stretch of the imagination.

In January of 2010 Laurel, Jean Luc’s owner flew down to Costa Rica from California with Jean Luc in cabin thinking that she could arrive in Costa Rica with just a health certificate and a prayer and be let into the country with her bird. She spent the next 24 hours in the airport guarding her bird, protecting him from being euthanized for breaking every country rule for birds allowed to enter Costa Rica. She had not checked with Costa Rica to find out what their regulations were for birds coming into the country and the airlines had not given her a clue when she booked with them either. This is very commonly a problem with airlines. 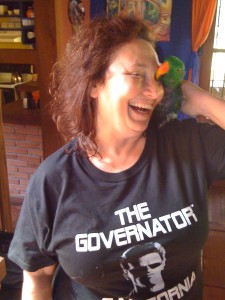 After arriving in the US, Jean Luc had to go through a substantial amount of blood tests and quarantine. Only after the testing was complete and the documents were in order and approved by both governments was Jean Luc allowed to re-enter Costa Rica.

Before Jean Luc came into the country, Laurel’s home had to be inspected to determine if it was ready for a parrot and whether or not it met the required specs according to the Ministry of Agriculture of Costa Rica. Once the house passed inspection, an importation permit was issued and an import CITES, not necessarily in that order.

Then the final documentation for the US needs to be finalized in the proper time frame as required. Then and only then does Jean Luc fly from California to Costa Rica.

After arrival Jean Luc is inspected by a MAG vet and clears customs. Finally he is delivered to Laurel!! One year since being separated from his mommy!! IT is a sweet reunion.!!