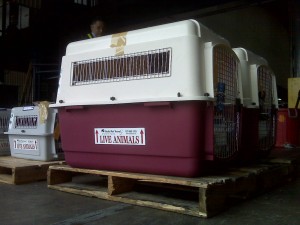 We were living in Costa Rica and had a problem. Having almost an acre of land around our home, we had managed to adopt 4 dogs and 3 cats — plus we still had 2 of the 3 cats we had brought from Toronto, Canada! The problem was that, after 7 years, we decided to move from the mountains north-east of San José to St. John’s, Newfoundland to be near family and were unwilling to abandon our pets.

We thought it would be relatively straightforward to transport the pets to Canada; after all, we had brought 3 cats from Canada to Costa Rica. Needless to say, transporting 9 animals thousands of miles, across 3 time-zones to another country (speaking a different language) is not a job for the faint of heart.

We will always be grateful to World Pet Travel, who handled the entire logistics of the move. They:

Oh, did we mention that they reported to us about progress every step of our pets’ journey and then checked after the pets arrived to make sure they were alright and to advise us on feeding and watering after such a journey?

World Pet Travel co-ordinated everything and made all the necessary purchases and payments — they provided a trued “door to door” service — no wonder we are grateful and recommend their services!

This site uses Akismet to reduce spam. Learn how your comment data is processed.